Webinar: Recruit and Retain Talent from the National Guard and Reserve

The beginnings of Baker College trace back to the turn of the 20th century, with the founding of Muskegon College by Woodbridge Ferris—who later became Governor of Michigan and then a U.S. Senator. Just two decades later, Eldon E. Baker—an educator who built a highly successful business college in Winfield, Kansas—moved to Flint and founded Baker Business University, which stood at the corner of Court Street and South Saginaw. In 1965, these two institutions came together under a single academic group headed by Robert Jewell of Muskegon. Throughout the years that followed, the schools continued to thrive and the group began to expand its outreach through the acquisition of other schools and locations. Today, Baker College serves thousands of students across the state of Michigan, as well as across the US through our global campus. Baker College offers diverse academic depth and breadth in undergraduate and graduate programs across 8 academic colleges, ranging from health sciences and engineering to business and technology. Baker College strives to cultivate and encourage positive action, critical thought, and the knowledge students need to improve their lives, careers, and the world around them. 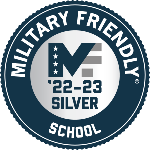 We rate how Military Friendly an organization is within 6 different categories. Learn more about our methodology.

The rating below reflect the extent to which each organization exceeds the benchmark standards for Military Friendly.

Why you should attend?

Baker College appreciates your service and believes you deserve a quality education at an affordable price. Whether active military or a member of the National Guard or Reserve, you can take advantage of the special active duty tuition rates, or utilize your VA benefits if a Veteran. To help you complete your education in the most efficient way possible we offer college credit for prior learning gained through military service, as well as offer accelerated options that make it possible to complete your educational goal of a bachelors or master’s degree in a shorter period of time.

© 2022 VIQTORY | Military Friendly® is owned and operated by VIQTORY, a service-disabled, veteran-owned small business. | VIQTORY, Military Friendly®, trademarks and logos are not affiliated with nor the property of the Department of Defense or any other federal agency. | The appearance of U.S. Department of Defense (DoD) visual information does not imply or constitute DoD endorsement.